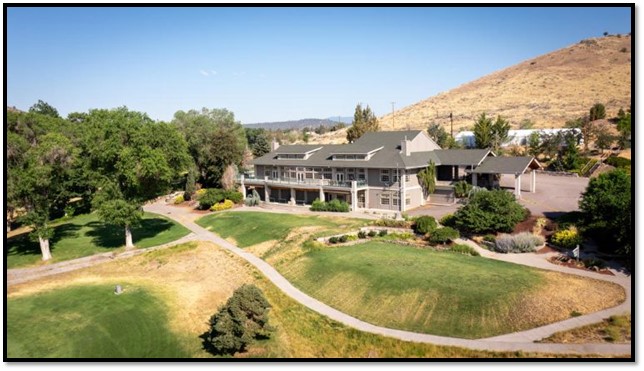 Today, in a joint press release, the Klamath County Economic Development Association (KCEDA), the City of Klamath Falls, and Coldwell Banker announced that developers for the northwest franchise, Growler Guys (locations in Washington, Oregon, Idaho, Nevada, and Wisconsin), will be purchasing the former Reames Golf Course & Country Club. The developers plan to operate the main clubhouse as a Growler Guys restaurant location, however, other sections of the building are being evaluated for additional amenities and enterprises. Long-term, the developers intend to use the remainder of the 200+ acre property for a variety of outdoor recreation and transportation based purposes.

Following in the footsteps of Europeans and East coasters, the original Growler Guys opened its doors in early 2012, having their operation located in Bend, Oregon. What started as a fill station has now grown to many locations across several states serving amazing craft beer in tap house, neighborhood-like settings.

In early September of 2020, representatives of Coldwell Banker and KCEDA worked together to recruit the northwest developer to the region, performing an extensive due diligence process which took dozens of locations throughout the County into consideration. Courtney Shaw, realtor for the buyer, commented on the lengthy site selection time the project took, saying, “The developers have had an interest in Klamath for a long time, but are especially excited by what growth has recently been achieved in the community and feel the time to strike is now on adding a location here. Just wanted to make sure the location and property were suitable for this unique version of Growler Guys. These developers take a lot of pride in being highly creative with each of their facilities. They are very thoughtful about ensuring each location pays real tribute to its surrounding community’s history and culture.”

Speaking on behalf of the development team leading the project, Butch Price, stated, “We like to have each of our restaurants have dimensions which are unique only to it. Klamath always seemed perfect for us to add to our locations, but finding the right match is the challenge when there’s growth. Now, we get to use this stage of the development to just be endlessly creative with the property.” Discussing the timeline for when the restaurant would be operational, the developers estimated somewhere likely in late Spring of 2022. Price stated, “There’s work we need to do on the clubhouse to make it our own, but nothing which should demand too much time or resources. This is a multi-phase, mixed use development we are about to undertake on a pretty large scale. We can’t wait to get the restaurant completed and onto incorporating some of our other development concepts on the property.”

Speaking for the Klamath County Economic Development Association (KCEDA), CEO Randy Cox spoke about all the parties involved with helping secure the development to the region, stating, “I continue to be impressed by how committed our area’s leaders are about working together to collectively solve the wide-ranging needs of development. KCEDA, Coldwell Banker, the City of Klamath Falls, and many other stakeholders stepped up to help the community accomplish this win. With the Swan Lake Project and other new development on the horizon, our visitor traffic will increase dramatically, helping the developers long-term vision arrive all the faster.” The economic development organization has been working with the development team for over a year now, providing services, including: market research analysis, site selection assessments, regulatory assistance, facilitate infrastructure development, incentive packaging, among many other offerings. Project Manager for KCEDA, Andrew Stork, briefly added to Cox’s comments saying, “The restaurant industry has developed a niche subsector of ‘experience driven’ locations. Growler Guys saw back in 2012 that this trend wouldn’t stay niche long, and this location is the developers’ taking their creativity to the next level. That said, freedom to ‘dream big’ in development introduces hurdles the bigger you go. In this case, the City staff really demonstrated strong leadership from top to bottom navigating some of the more complex issues which came up at times.”

The City’s Director of Development Services, Scott Souders, spoke on behalf of the City of Klamath Falls about the developer’s announcement, following a City Council meeting this past December, where he and City Attorney, Mike Swanson, proposed a special agreement which would correct historic infrastructure issues on the location relating to domestic water access, giving the developer a clear pathway to proceed with closing. Souders commented on the work leading up to the earlier council meeting, and what the developers’ announcement means to the city staff. “There were a lot of factors as to why this particular development was the right fit for that property. From a timing and technical standpoint, certainly, but also a community momentum standpoint. I’m quite proud of how the City of Klamath Falls handled some complex logistical obstacles and was able to remain mission-oriented the whole way through. This announcement is a great example of partners problem solving together. It is collaboration like that locally which will attract new development in our community.”

Since 1975, KCEDA has reflected the best of private enterprise, responsibility and dedication. Its mission is to provide tailored recruitment and business retention/expansion programs, new opportunities for jobs, and a diversified, value-added industrial base/expanded economic development climate in southern Oregon. To learn more about KCEDA and how they can help you, please visit their website, www.ChooseKlamath.com, or contact their offices using the information below.