On Monday I was fortunate enough to be able to take part in Klamath County Economic Development Association’s Economic Summit. Once again this year I was able to tag-team the economic discussion with Damon Runberg, formerly of the Employment Department and now with Business Oregon. As I was putting together my presentation and figuring out how Klamath’s economy is both doing and how it fits into the statewide picture, I was struck by quite a few things that I thought I should share here as well.

First, just to set the stage, employment in Klamath County has fully recovered. As we have discussed previously, we know that the state’s smaller and medium-sized metros and rural areas are seeing the strongest recoveries compared to large metro areas. Klamath is no exception, and outpaces the typical rural county by a percentage point or two as well. Damon noted that while Klamath’s current estimates of employment look good, they will look even better in the months ahead once the annual benchmark revisions are done as the county’s actual payroll records in the QCEW data are much stronger than those seen in the published monthly data. (For those of you looking at any current county data today, this upward revision will be broadly true for all counties.) 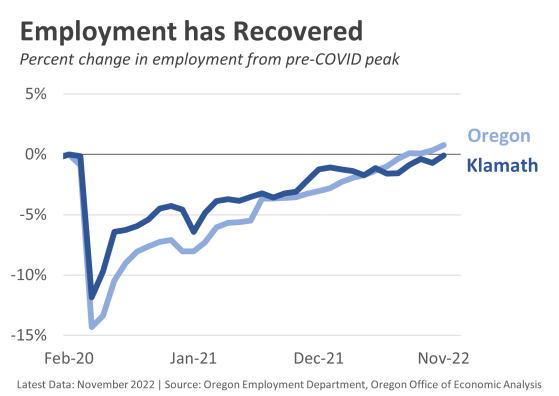 Second, it’s not just jobs but also income growth that has been strong. This goes for both total personal income that includes transfer payments like Social Security and the recovery rebates, and underlying growth excluding those transfers. During the pandemic, total income in Klamath County increased by more than 20%, or more than 10% per year in 2020 and 2021, which outpaced the state and nation. Looking forward, Social Security accounts for about 10% of all income in Klamath, meaning this year’s 8.7% COLA increase raises countywide income by 0.8 or 0.9 percent, a larger amount than the Oregon and U.S. average. 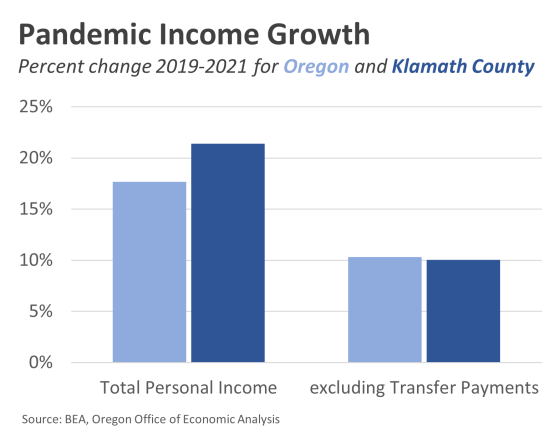 Unfortunately, the good income growth has not or at least not yet translated into a noticeable reduction in poverty in the county. Poverty rose back in the 1980s and 1990s as the Timber Belt suffered economic decline and has largely held steady in the 15-20% range which is noticeably higher than the state or nation overall. This is, by far, the most pessimistic chart I have and a good reminder that even in good macroeconomic times, many of our neighbors still struggle. 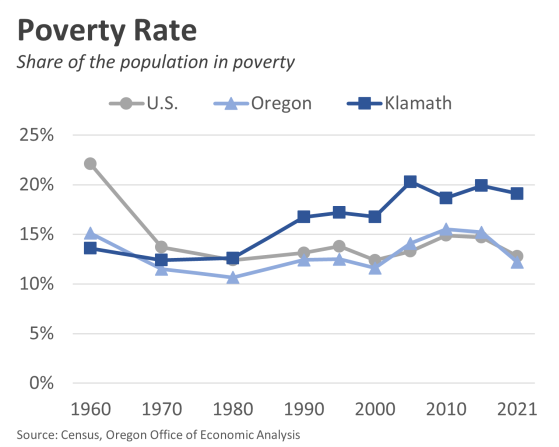 Third, while Oregon’s population overall is not booming, the same cannot be said for Klamath. In the past 5+ decades, Klamath’s population has grown faster than Oregon 7 times. Twice back in the 1970s, and then again in 2018, 2019, 2020, 2021, and 2022. Part of that is the slowdown at the state level, but part of it is the acceleration at the local level. When the official 2020 Census data came out, Klamath’s population was noticeably above expectations or recent estimates at the time. That stronger growth has continued since, with the latest 2022 estimates from Portland State already above the forecast for 2025 and nearly to the 2030 population forecast. While Klamath’s natural increase in the population is negative, like the state, the local total fertility rate is more like 1.9 compared to 1.4 at the state level. This should bode relatively better for future population gains, even as migration is by far the biggest factor. 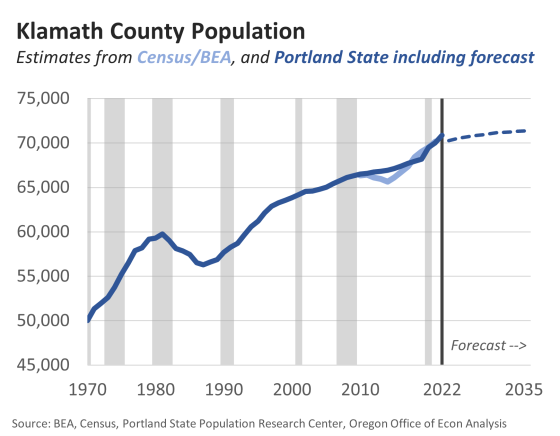 Note: I am showing two sets of population estimates for the 2010s. In dark blue are the current published estimates from Portland State. In light blue are the estimates published by the BEA. The reason is technical, but important. BEA has gone ahead of done some preliminary work to revise the 2011-2019 county population figures, whereas Census and PSU have yet to publish their intercensal revisions. The big jump you can see in the dark blue line in 2020 will be less pronounced once the intercensal revisions are complete, which is why the light blue BEA estimates are important to note. The rebound and acceleration in Klamath growth did not start in 2020, but rather in the years leading up to the pandemic.

Finally, key questions are always about who moves. Clearly more people are voting with their feet and choosing to live in Klamath than choose to move away, but who are these new residents? Broadly speaking Klamath is gaining population across all age groups. In particular, many more 20- and 30-somethings from elsewhere in Oregon are choosing to move to Klamath, while many 50- and 60-somethings from outside the state are choosing to move to Klamath in recent years. In the Census data Klamath loses population to both the Rogue and Wilmette Valleys but gains from the Coast, the Gorge, and Northern California. In the IRS data the patterns can looking somewhat different depending upon the year. Now, in the most recent Census data the net gains are coming from low- and middle-income households, and those without college degrees. Unfortunately, we are not able to get crosstabs on that to separate out Oregon Institute of Technology grads moving away to start their careers, or the impact of workers versus retirees at the income level. But certainly, something worth noting in the data. 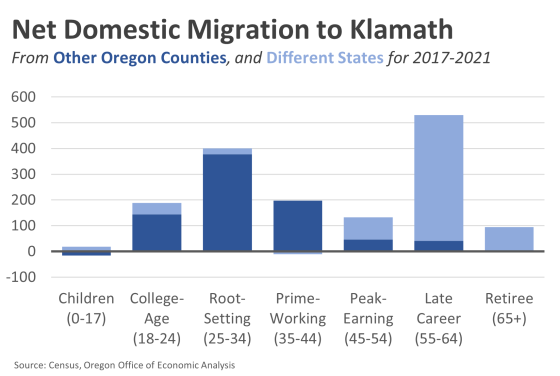 Thanks again to KCEDA for having me and I was happy to be able to discuss some good economic news for a change, especially given our most recent state economic and revenue forecast and the uncertain macro outlook.
© 2023 Klamath County Economic Development Association. All rights reserved.
Contact Us
541.882.9600
Site Selection